Rather than intermittently post photos from various sources of the Wildlife Photographer of the Year and Lucie award ceremonies from last fall, we decided to compile them into a single post to give them a better order.

Daniel accepts the award for Wildlife Photojournalist of the year from the Veolia Environment Wildlife Photography during a ceremony at the Natural History Museum in London. 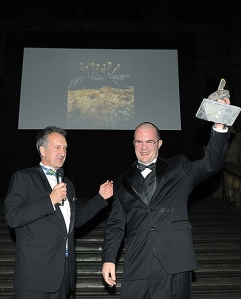 Moments later, Daniel accepts an award for Wildlife Photographer of the Year. Beyond the honor for this recognition, it’s even cooler for the award statue being a commissioned glazed clay sculpture by Nick Mackman of a pelican (since the photo chosen was of the pelicans).

Daniel celebrates with friend Jack Dykinga, above, and with his father and brother, below.

END_OF_DOCUMENT_TOKEN_TO_BE_REPLACED

Daniel’s photos from the Gulf of Mexico oil spill continue to garner awards from contests. The International Photography Awards (IPA) have given Daniel’s Gulf spill photos a first place in their “Environmental” category and named his entry as a finalist for their “Deeper Perspective” award (for some reason their gallery pages don’t actually name the awards received, but rest assured, they’re listed on the overall winner page).

The IPA apparently likes to build a bit of suspense for their more prominent awards, so we won’t find out if Daniel has won the Deeper Perspective category until it is announced at the 9th Annual Lucie Awards on October 24th, at Jazz at Lincoln Center in New York. Our fingers are definitely crossed.

Portfolios of Daniel’s work for Greenpeace on last year’s BP oil spill in the Gulf of Mexico have been recognized by both the Pictures of the Year International (POYi) and Days Japan magazine contests. The POYi judges gave an “Award of Excellence” to a set of twelve aerial photos of the spill in the general news picture story (GNPS) category. Days Japan magazine, which has a general category for all photojournalism produced over the previous two years, granted a “Special Prize by Juries” for an entry of the same oil spill photos. Daniel’s POYi portfolio was the only one focused on the oil spill to be given any recognition out of all the GNPS entrants. Likewise, the Days Japan award to Daniel was the only one for work on the spill.

Daniel won 2nd place in the Veolia Environment Wildlife Photographer of the Year One Earth Award category. The photo, above, is from last year’s Prince’s Rainforests Project and Greenpeace assignment to Indonesia, is an aerial view of two fallen trees in a newly planted palm plantation on the island of Borneo. While you’re there, feel free to click on the “Visitor vote” tab of the page and cast your ballot for Daniel’s photo.

In case you’re not familiar with the contest, Veolia Environment Wildlife Photographer of the Year is run by the UK’s Natural History Museum and the BBC Wildlife Magazine. It’s a satisfying end to the 2009/2010 contest season and gives a nice little kick of motivation for next year’s contests which we’re sure to put a heavy emphasis on Daniel’s coverage of the Gulf Oil Spill.

Yesterday, the International Photography Award winners were announced, with Daniel taking second place in the aerial category and an honorable mention in the environmental and “deeper perspective” categories.

A series of five photos from Daniel’s assignment with the ILCP Yucatan Peninsula last October won second place in the Aerial photography. These photos were shot from flights provided via the assistance of Lighthawk, an organization that helps connect pilots and planes with environmental conservationists. The photos (and subsequent award) simply wouldn’t exist without Lighthawk’s generosity.

Additionally, honorable mention was granted in both the Editorial-Environmental and Editorial-Deeper Perspective categories to a series of photos Daniel shot in the Democratic Republic of the Congo last spring, documenting deforestation for the Prince’s Rainforests Project (the photos are exactly the same between both entries, so you can just look at it once, if you want).